Data Scientists spend a lot of time importing, cleaning, tidying and transforming data before any decent analysis can start. Like many, the industry that I work in typically email files to communicate data and report. I follow a consistent approach to ETL and subsequent data concentration to better manage the accumulation of multiple, disparate files from a variety of sources and different formats.

This tutorial demonstrates a simplified version of this process. It is split into four parts, starting with manufacturing data and culminating in file-based IO1.

Part 1 covers importing and cleaning base data and creating features.

Part 2 extends the output from Part 1 with simulated data in the context of a gym training scenario.

Part 4, the final tutorial, imports, tidies and transforms the exported files from Part 3 in an automated and standardised way.

As an honorary English person, I decided to simulate a gym training log for the current English football squad. The result is a daily record of selected exercise repetitions for each player, logged during a gym training session. It covers a two month period, with the first month during 2017 and the latter in 2018, a year difference.

The base list of players is copied from Wikipedia, extended further down this tutorial with simulated data, and used to demonstrate procedures and functions to do with IO.

I always declare libraries at the top of the document in a typical workflow. It makes it a lot easier to know upfront which libraries are used when sharing the document with others.

Keeping general functions towards the top of a document makes it easier to reuse throughout. In larger projects, I tend to create function files that are sourced by other files, sourcing it upon setting up a document. It promotes consistency, continuity, standardisation and simplification.

A better idea is to create packages, as I am increasingly reusing functions between different projects. Hadley Wickham wrote a whole book advocating the use of packages to create fundamental units of shareable R code, bundling together code, data, documentation, and tests.

Grouping generic parameters in one section quickly allows new users to adopt a document customised to their environment and for its intended use. Here I am setting up the relative path to the source data.

The data type of each column is guessed when the base source data is imported. I always increase the guess_max parameter as a rule unless I know the data structure in advance.

I have previously imported data where the first few hundred values in a column are empty, having populated values further down the table. The import function guesses the data-type as logical when it isn’t, resulting in subsequent populated values incorrectly coerced to NA.

A hangover from working with databases, I tend to tidy column names upon import, using the func_rename_tidy function as it simplifies coding after import.

Let’s take a look at the first few rows of data and simultaneously create an initial table for later comparison.

The Date_of_birth_age field contains multiple variables, depicting the date-of-birth, and age calculated at the time the article was published. This is messy data, which I have previously written about.

The DOB is extracted from the field and converted to a date datatype, with the age part discarded. A new feature Age is created, which is the calculated interval between DOB field and the lubridate::today() function.

Let’s inspect the head of the tidied compared with the initial dataframe.

This confirms that the DOB field has been converted into a date field, and used to calculate the Age based on today(), the current date when the notebook was run.

The number of repetitions for each one of the standard exercises are logged during a training session. Most players are unable to train every day, so there are gaps in the timeline for each player during the recorded period, with some players missing more sessions compared with others.

Between 15 and 22 players train daily, represented by the Sampled Players in the above graph. Days during the two months where no exercises are simulated are coded those as Day Off.

Some of the exercises repetitions, represented by Repetitions in the graph have a zero count, the case where a player skips an exercise during a training session.

Let’s start this section by creating some parameters and reference values.

The following code section is the simulation function that maps together the parameters with random combinations and sequences through the simulation process, as represented by the Simulation Process Cycle graph shown above.

The code section below calls the tmp_exercise_data function by feeding it the previously created parameters.

Let’s take a look at the first few rows of player data joined with the simulated data.

The following graph shows the cumulative repetitions by player and exercise over a timeline, highlighting the missed training sessions in red.

The func_visualise_day_off function is used to impute a value for the days without exercise data for a player, making it explicit when visualising the data. 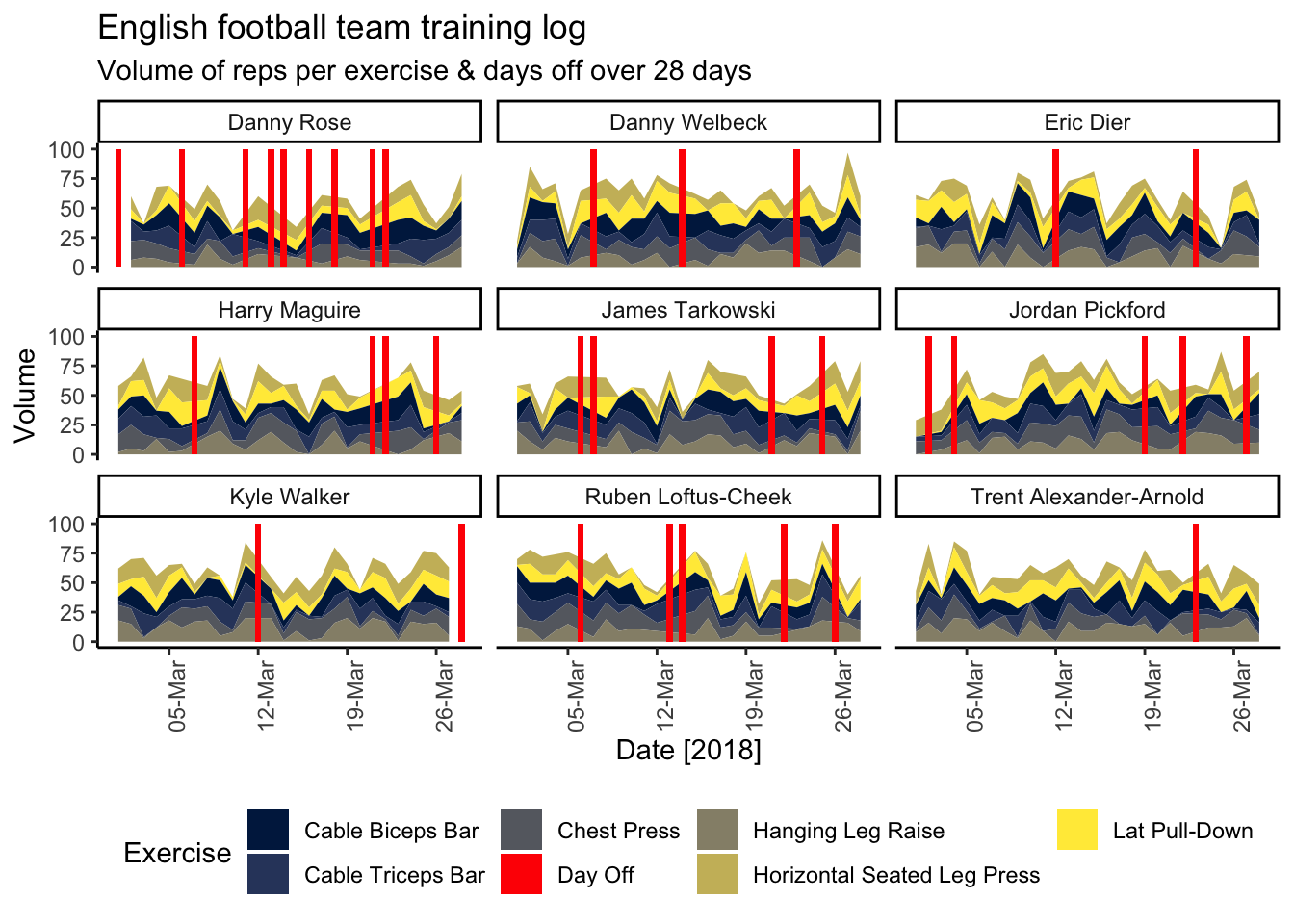 The aim of this part is to output data into a variety of files to be consumed in Part 4, which is to Import Simulated Data.

The following image shows the process by which data is transformed, grouped and outputted into a variety of file types. 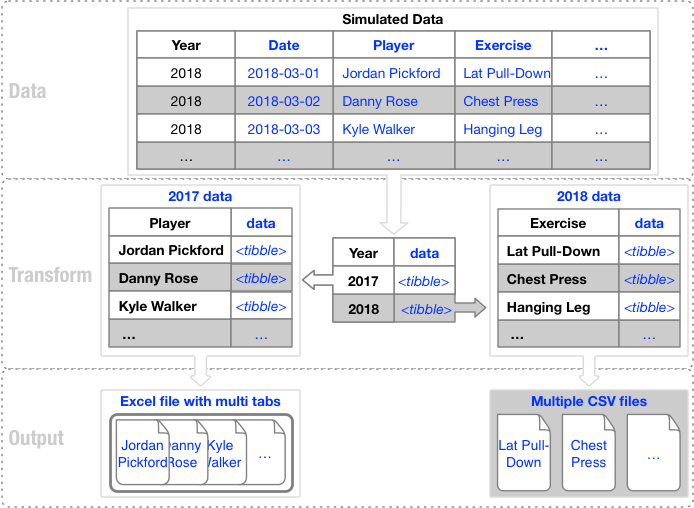 The training log data is grouped by year, data nested and exported to two file-types, including Excel and CSV.

I use the openxlsx library to create and manipulate Excel files. The aim is to create one Excel file for the 2017 data, creating tabs for each of the 22 players, and populating each sheet with relevant data.

Using 2018 data, group data by Exercise and output each to an appropriately named CSV file.

Confirm that the files are created by checking the directory_path folder, as specified in the General Parameters section.

The aim is to dynamically import data into a common dataframe. With Excel files, the function lists and unnest all the tabs, and import each table back into the calling files tibble as is the case with CSV files.

The func_get_file_dynamic function dynamically imports data depending on file-type, depicted in the process graph above.

In this section we generate a list of the files located in the directory_path parameter folder, import it using the func_get_file_dynamic function, unnest it and parse_guess the data-types.

Let’s check the first few rows of the imported data.

Now create a couple of visualisations. The first is the number of records per CSV file or per Excel tab after removing entries with missing or zero volume. 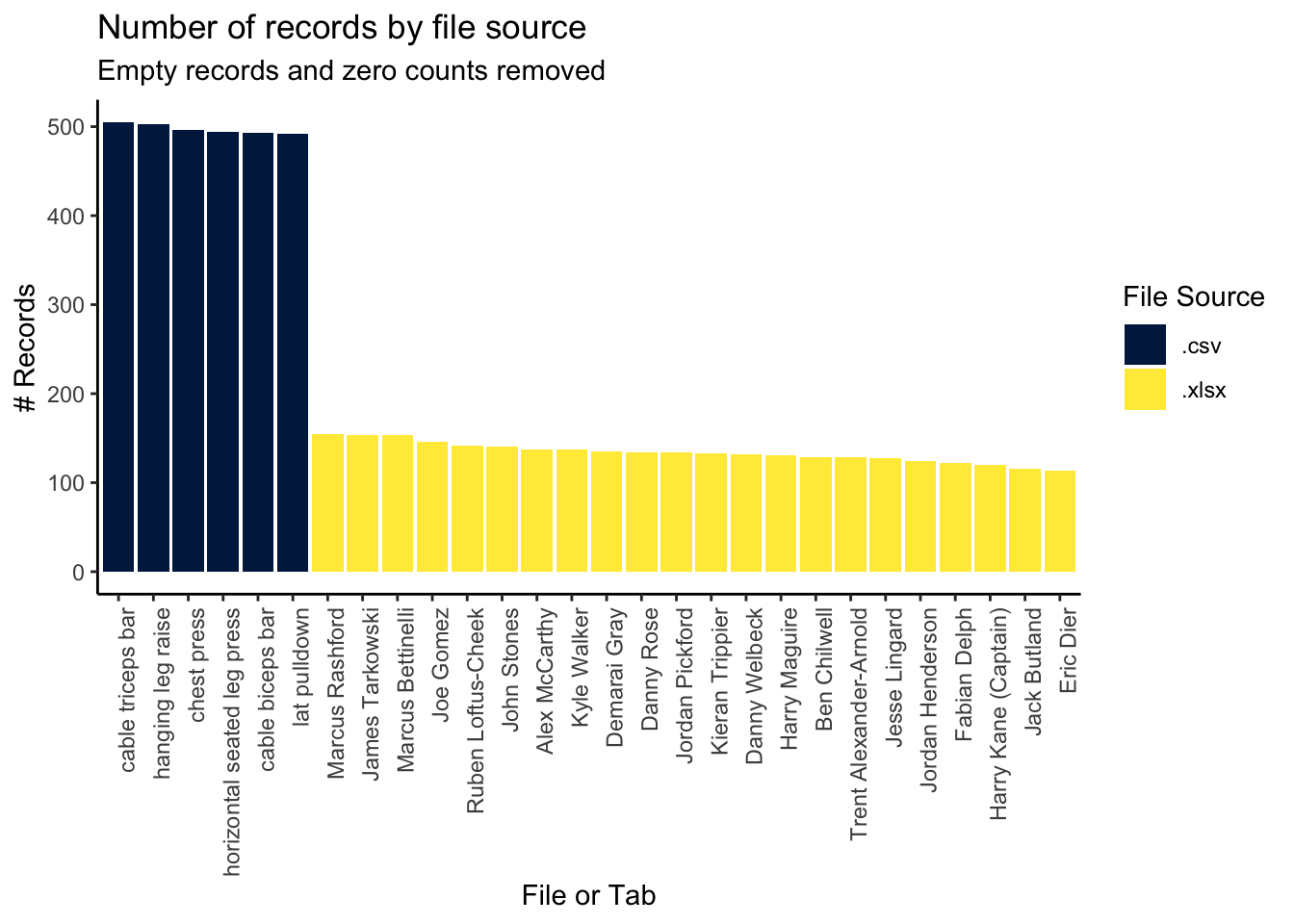 Now combine the file data and create a plot grouped by Player, file type and Year. 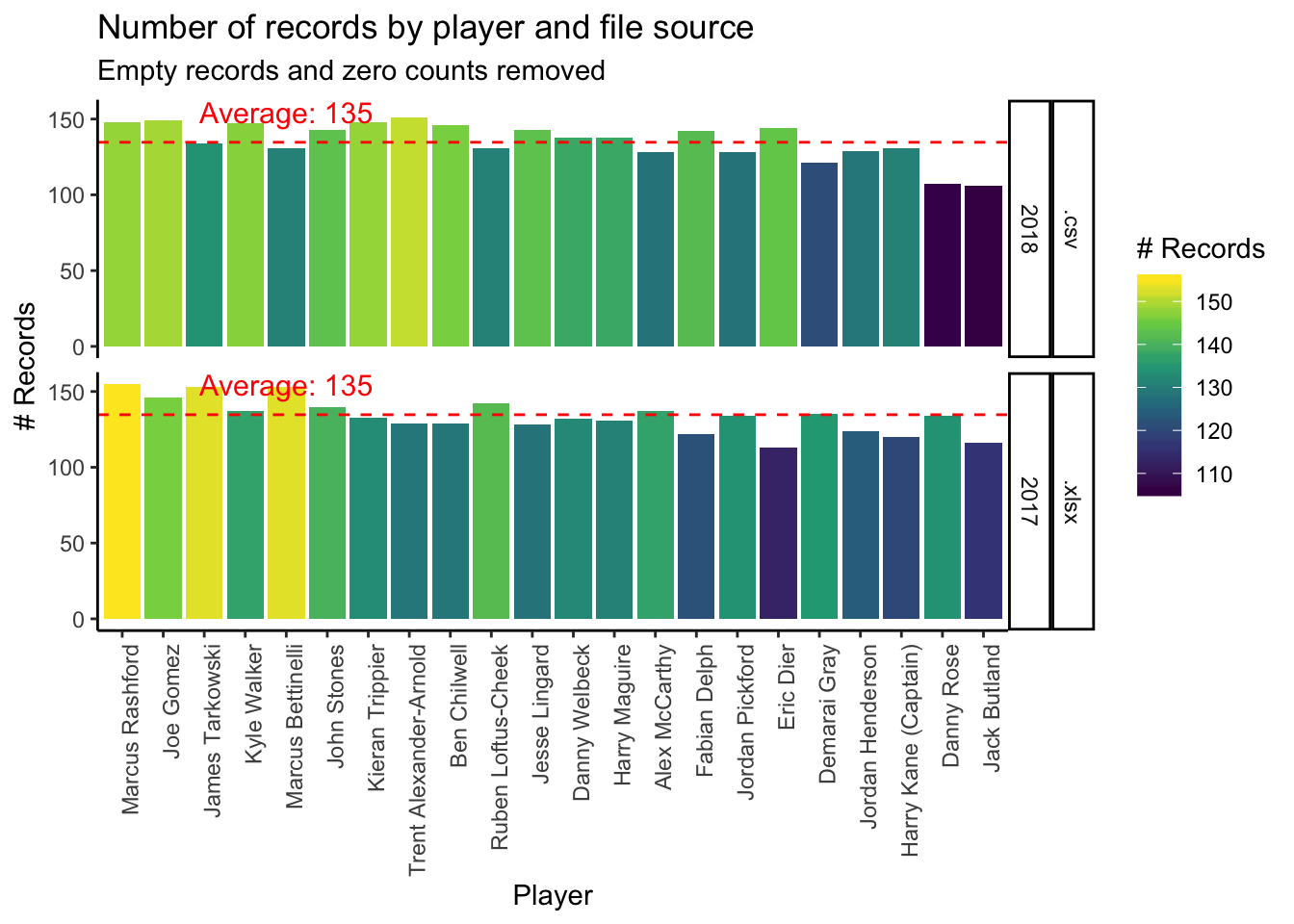 This tutorial is simplified and without real-world nuances and overhead, like error handling for example. However, the power and simplicity of the approach is adequately demonstrated and can be extended for use in similar situations.